The first early copies of the poem to be printed, though, had little to do with their author; nowhere on the title page of the first edition of the poem, pictured below, does Shakespeare’s name appear: 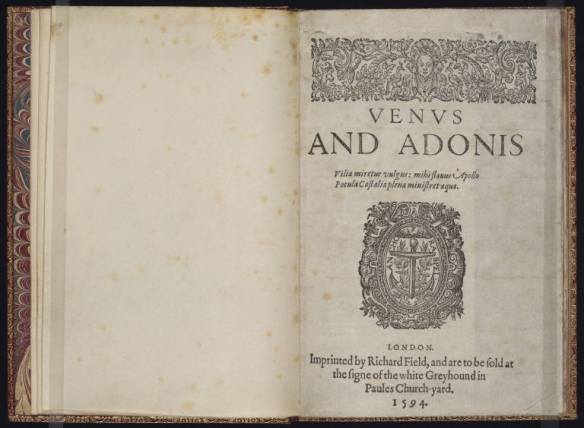 (Follow this link for a scanned copy of Venus and Adonis, from the collections of Yale University’s Elizabethan Club)
This despite the fact that its printer Richard Field hailed, like Shakespeare, from Stratford-upon-Avon, a town modestly sized enough for one to surmise that Shakespeare and Field knew each other at least to an extent. On the following pages of the poem, a dedication by Shakespeare to the young Earl of Southampton does record Shakespeare’s name, ensuring that the many readers who picked up Field’s quarto and the later octavo editions would have made some connection between the poem and its authorial origins:

And yet such writing was relegated to the inside pages of the work, not advertised on the title page; anyone who was considering purchasing a copy of the poem would have done so based on its title rather than anything else, and Richard Field’s thinking, when he was planning the poem for the printing press, was surely along similar lines.

In this way, the absence of a name on the title page to account for such a poem reveals as much about Shakespeare’s time—about the publishing practices, the reading habits, and the conceptions of authorship that marked early modern England—as it reveals about Shakespeare himself. What sixteenth-century English readers tended to care about, when it came to imaginative, vernacular pieces such as Venus and Adonis, was not so much the writer as the thing written—its subject matter, its story, its style.

When authors were advertised—as Shakespeare himself soon would be—it was only because the writer in question had produced a large enough body of work to become a recognizable brand or personality of writing. While Field’s quarto of Venus and Adonis helped to make Shakespeare a professional success, “Shakespeare” was far from an established figure worth advertising when Richard Field sat down to commit the poem to print. Shakespeare was, more humbly, an anonymous man from a rural town with a talent for verse; it would take some time—and much more writing, printing, and reading—for him to become the author he is today.