Shakespeare’s actors enjoyed a celebrity status that was in many ways not so different from the renown enjoyed by actors today. Names like Edward Alleyn, Richard Burbage, and William Sly were recognizable among London’s theatergoers for the gestures and verve they brought to their roles. So recognizable were these actors, and so distinctive were their mannerisms, that dramatists frequently would write the characters of their plays with particular players in mind. The close connection between writers and actors at this time—especially pronounced when the actors and writers worked for the same theater company—made this practice of writing-for-actors more common than it is even today.

Shakespeare’s double status as actor and player would have made him markedly sensitive to the traffic between poetry and performance that marked the Elizabethan stage, and in the first quarto of Much Ado About Nothing, published in 1600, we find telling evidence of one of the actors for whom Shakespeare wrote.  (Follow this link for a scanned copy of Much Ado About Nothing, from the collections of Yale University’s Elizabethan Club.) 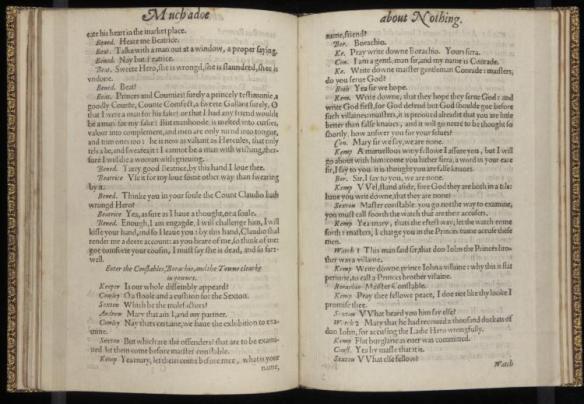 The lines are familiar enough, but the names have been altered. Who is Kemp? In the Folio version, the speech prefix of Kemp would be changed to Dogberry, the name we now associate with the unwittingly helpful fool of Shakespeare’s comedy, and elsewhere in the quarto version—Dogberry’s first appearance, for instance—the prefix remains either “Dog” or “Dogberry.” So why, then, the change to Kemp later in the quarto?

The change would seem to count for more than a typesetter falling asleep at the wheel. William Kempe, the “Kemp” evoked in the quarto’s speech prefixes, was an actor well known in the 1590s for the comedy he brought to his roles. Clownish and foolish characters like Costard, probably, in Love’s Labours Lost and Bottom in Midsummer Nights Dream earned Kempe a comedic reputation that was strong enough to stick with him beyond the theater.

When he left the Lord Chamberlain’s men, around 1599—due, some evidence suggests, to conflicts between Kempe and other shareholders in the company—he was well-known enough to think he could take his famous jigging on the road. His self-proclaimed “Nine Days Wonder” brought him by foot from London to Norwich, and he morris danced the whole way. Could the change in speech prefixes of Dogberry, then, have been an attempt to capitalize on Kempe’s comic celebrity?