Just how much and how widely Shakespeare read are matters of some scholarly dispute; but when the sources are more certain, as with Holinshed’s Chronicles, the level of engagement—with what intensity, precision, and care Shakespeare read—become remarkably apparent. The second volume of Holinshed’s Chronicles, which offered a prose history of England’s early monarchs and internecine strife, provided much of the material that made its way into Shakespeare’s many history plays, from the early exercises of 3 Henry VI to the later plays like Henry V. 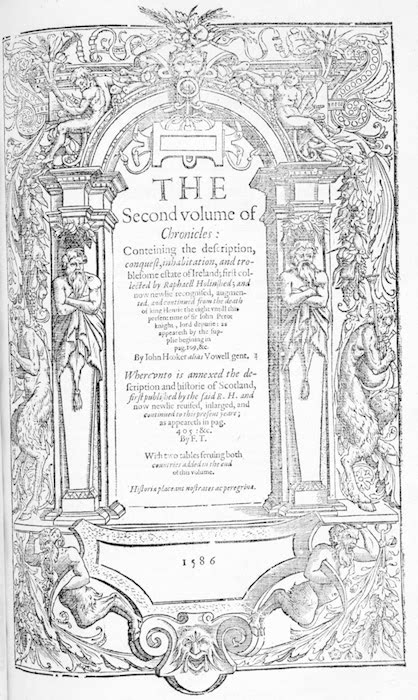 The volume Shakespeare probably consulted was first published in 1587, in folio format; at several hundred pages, it would have been an expensive acquisition, and therefore owned perhaps by the theater company for which Shakespeare was writing, to be consulted by writers on something of a need-by-need basis. The page displayed here is a typical example of the sixteenth-century folio’s format: two columns per page, printed in black letter font, with occasional summaries of paragraphs—usually confined to plot points—printed in the margins.

Also typical of early modern printing practices are the inverted commas clinging to the margins—on this page, there are two sets of them adorning the left column’s first full paragraph–and these commas were intimately bound up with reading practices of the time. Their purpose was to signal important, pithy, memorable or moralizing phrases that were worth copying into one’s commonplace book, for later reading or even eventual use in one’s own writing. Singled out for such commonplacing, here, is a saying recited by the Archbishop to the young Henry V: “The archbishop further alleged out of the book of Numbers this saying: When a man dieth without a sonne, let the inheritance descend to his daughter.” 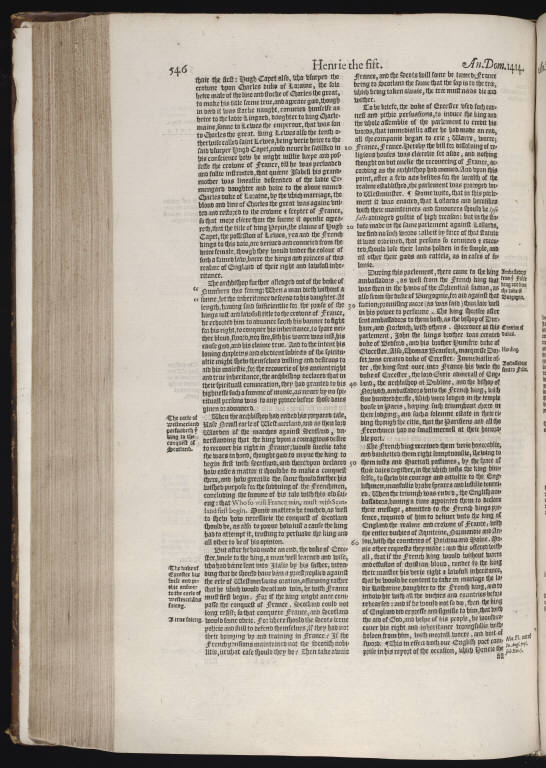 The saying enjoys an afterlife in the final installment of Shakespeare’s second tetralogy, at the beginning of Henry V, when the Archibishop of Canterbury assures Henry of his rightful claim to the French throne:

King: May I with right and conscience make this claim?
Canterbury: The sin upon my head, dread sovereign:
For in the Book of Numbers is it writ,
‘When the man dies, let the inheritance
Descend unto the daughter.’ Gracious lord,
Stand for your own, unwind your bloody flag,
Look back into your mighty ancestors.

Curiously, the line receives much more diminutive annotation in the 1600 quarto of the play, where a small dot on the margin marks it off: 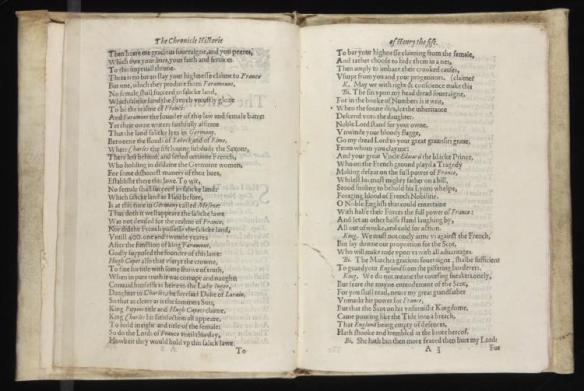 Shakespeare’s reading of Holinshed is getting put, here, to serious dramatic work—but not, perhaps. without its due measure of scrutiny. If such a line can so easily plucked from one work and put into another, what does that say about the flexibility of King Henry’s own politics?