Romeo and Juliet made its first print appearance in 1597, thanks to the efforts of the printer John Danter. Danter oversaw the first printing of a Shakespeare play, Titus Andronicus, in 1594, and the first quarto of Romeo and Juliet followed a few years after. Two years later, though, another printer would produce a quarto of Romeo and Juliet that would leave Danter’s somewhat obsolete. The second quarto, printed by Thomas Creed in 1599 and pictured above, represents a considerable expansion of Danter’s original edition, as its sub-title announces: The Most Excellent and Lamentable Tragedie, of Romeo and Juliet. Newly corrected, augmented, and amended: As it hath bene sundry times publiquely acted, by the right Honourable the Lord Chamberlaine his Servants. The augmentations advertised by Creed’s second quarto amount to about 800 lines of text, as well as reconfigurations of the dialogue in several scenes.

Creed’s amplification, however, was not without its errors; in this, he was representative of many early modern printers, who were frequently forced by time constraints to read broadly but roughly, proofreading when possible but only, it may be surmised, to the point of sufficiency rather than of perfection. Elizabethan readers had their own varying levels of attention when it came to reading, paying attention to the pamphlets they purchased in ways that were frequently different and less occasionally similar to our own.

When it came to correction by readers, at least, there were some convergences with modern reading practices—at least if this particular copy of the second quarto of Romeo and Juliet is to be taken as evidence. The earliest owner of the pamphlet discovered typos in the speech headings of the play, and corrected them in his hand with a level of care the printer could probably not afford. It is not so different with borrowed books today, when we discover that a diligent hand before us has fixed a typo by writing in the margins. Nor is this second quarto so different from library books with unrelated notes dashed off at their edges: 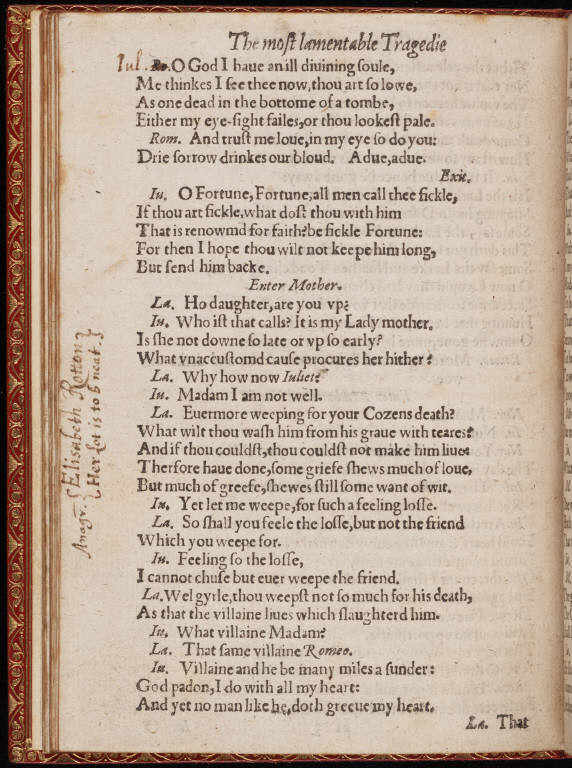 “Elisabeth Rotton,” wrote the quarto’s first owner across one of the pages, “Her lot is to b neat”—an early modern anagram.