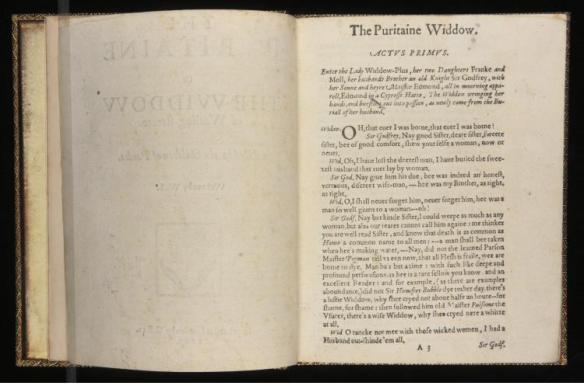 The Puritaine, or, The Widow at Watling-streete offers up another instance of apocryphal Shakespeare encouraged by its title page (“Written by W.S.”) and later affirmed by its inclusion in Philip Chetwinde’s Third Folio of 1664. For this alone, it is interesting enough, but within the context of Shakespeare at Yale, it is especially remarkable for the performance history it advertises: “Acted by the Children of Paules.” Among the quartos exhibited here, few boast of such a venue, the most commonly advertised performance history so far being the King’s Men—and not surprisingly, since that was Shakespeare’s playing company, and many of the plays featured so far were in fact written by Shakespeare for the company he was a part of. 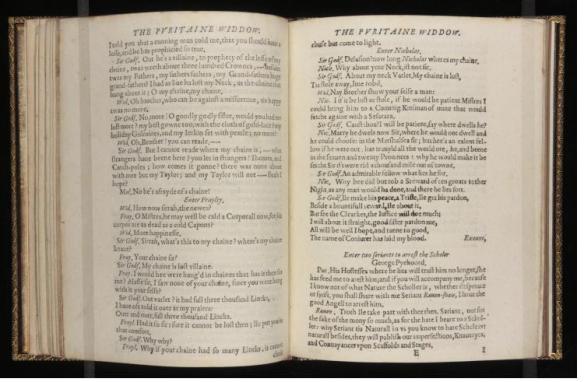 But here, with The Puritaine, we get a glimpse at a different kind of performance history–young boys, rather than full-grown men, playing all the parts of the play (there were no women actors). While there was a longstanding tradition of boy players in England, it had fallen out of practice for most of the 1590s; with the turn of the century, though, boy players returned to popular standing, usually playing at venues like churches and Blackfriars Theatre–venues smaller and more private than the massive open-air Globe Theatre. So prominent were companies of boy players like the Children of Paules that they would seem to have given Shakespeare’s company serious enough competition to receive a scornful acknowledgement in Hamlet:

Hamlet: How comes it? Do they grow rusty?

Rosencrantz: There is, sir, an aery of children, little eyases,
That cry out on the top of question, and are most
Tyrannically clapp’d for’t: these are now the
Fashion, and so berattle the common stages-so they
Call them—that many wearing rapiers are afraid of
goose-quills and dare scarce come thither.

Hamlet: What, are they children? Who maintains ‘em? How are
They escoted? Will they pursue the quality no
Longer than they can sing? Will they not say
Afterwards, if they should grow themselves to common
Players—as it is most like, if their means are no
Better—their writers do them wrong, to make them
Exclaim against their own succession?

Rosencrantz:’Faith, there has been much to do on both sides; and
the nation holds it no sin to tarre them to
controversy: there was, for a while, no money bid
for argument, unless the poet and the player went to
cuffs in the question.

Guildenstern: O, there has been much throwing about of
brains.

Hamlet: Do the boys carry it away?

Rosencrantz: Ay, that they do, my lord; Hercules and his
load too.

Hamlet: It is not very strange; for mine uncle is king of
Denmark, and those that would make mouths at
him while my father lived, give twenty, forty,
fifty, an hundred ducats apiece for his picture
in little. ‘Sblood, there is something in this more
than natural, if philosophy could find it out.