John Dryden was not alone among late seventeenth century writers in his enthusiasm for Shakespeare’s drama, but that enthusiasm–even in the case of Dryden–was not free of censure. If later writers began to find in Shakespeare a testament to all that English literature could accomplish, they nevertheless brought to bear upon his works their own, historically conditioned tastes–and in some surprisingly revisionist ways.

This edition of King Lear, for instance, edited and re-assembled, as it were, by Nahum Tate, enjoys some revisions that might strike us as particularly surprising. Shakespeare’s great, expansive tragedy, which spares so few of its characters from unsettling ends, takes on in Tate’s hands a more optimistic note. Tate writes:

‘Twas my good Fortune to light on one Expedient to rectifie what was wanting in the Regularity and Probability of the Tale, which was to run through the whole A Love betwixt Edgar and Cordelia, that never ‘changed word with each other in the Original. This renders Cordelia’s Indifference and her Father’s Passion in the first Scene probable. It likewise gives Countenance to Edgar’s Disguise, making that a generous Design that was before a poor shifte to save his life… This Method necessarily threw me on making the tale conclude in a Success to the innocent disrest persons: Otherwise I must have incumbred the stage with dead bodies, which conduct makes many tragedies conclude with unseasonable Jests. Yet was I rackt with no small Fears for so bold a Change, till I found it well receiv’d by my Audience.

To us, Shakespeare stands as so monumental an authority that to alter him would be to ruin him; to an earlier mindset, though, for whom Shakespeare’s plays were less historically distant, such changes were more a necessary improvement, exposing rather than obscuring the value Shakespeare held for his time. 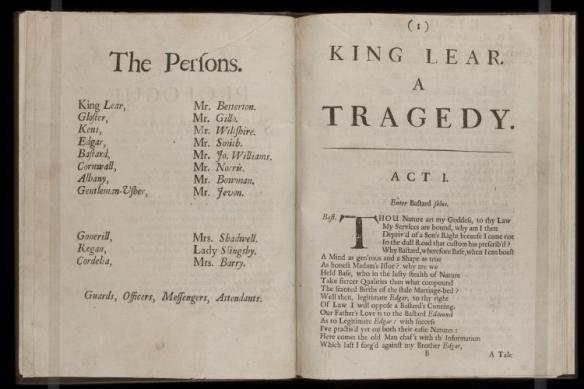