Kathryn James is the Curator for Early Modern Books and Manuscripts & the Osborn Collection at Yale University's Beinecke Rare Book and Manuscript Library.

“ To the memory of my beloued, / The Author / Mr. William Shakespeare: / And / what he hath left us,” begins Ben Jonson’s second dedicatory poem to the first folio edition of Shakespeare’s works in 1623. And, as Remembering Shakespeare reveals, the question of what, precisely, he has left us has persisted over five centuries. Although the value of this legacy has seldom been in dispute, its meaning has never been fixed, whether in Shakespeare’s lifetime, or following his death, in the memories of his colleagues and contemporaries, or still later, as subsequent ages, including our own, continued and continue to remember and re-imagine him.

Mr. William Shakespeares Comedies, histories, & tragedies. Published according to the true originall copies (London, 1623).  From the collections of the Elizabethan Club, Yale University.

“Reader, looke / Not on his Picture, but his Booke,” wrote Jonson. And yet, as the Yale University collections demonstrate, the publication of any book, let alone a book offering itself as a definitive edition of Shakespeare’s works, was only ever the consequence of the always unpredictable circumstances of both the theater and the print shop in which Shakespeare’s remarkable imagination was made visible to readers and audiences. In notebooks, in variant editions, in performances and adaptations, Shakespeare’s memory was written in always shifting lineaments, for motives which often had little if anything to do with Shakespeare’s own.

And yet, the “Booke” of Shakespeare where, as Jonson knows, Shakespeare remains alive, became the book of all books. “Are you not an idolater of Shakespeare?” wrote the author Mary Russell Mitford to a friend in 1811, “I am sure you must be. I would rather give up all the other books that were ever written, retaining his alone, than sacrifice his and retain all the other works of all other authors.” And in 1926, the imagined Judith, Shakespeare’s sister, would for Virginia Woolf effortlessly invoke another universal: all the words not written, published, read, remembered, by authors who existed outside of a literary canon that had come itself to be epitomized by an author whose own works only circumstantially, and inevitably with the aid of others’ agency, came into print or performance. 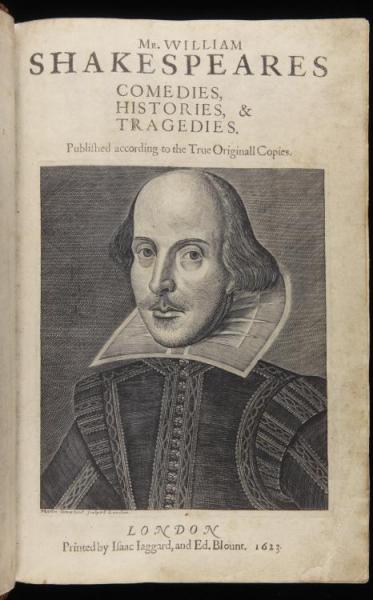 From Thomas Dowse’s late sixteenth-century quotation from Lucrece to Maynard Mack’s mid-twentieth-century Yale English 34 syllabus (and Walter Wilson Greg’s Shakespeare crossword puzzle) lies one trajectory of the many possible histories of the “Booke” of Shakespeare. It is a history peculiarly traced through the material histories of the many books of Shakespeare, as, over the past three centuries, they have come together in the Yale University collections gathered in this exhibition.

The infant Shakespeare, attended by Nature and the Passions, John and Josiah Boydell, Shakespeare gallery, Pall-Mall, and no. 90 Cheapside, Printed by W. Bulmer and co., Cleveland-row, St. James’s, 1803.  From the collections of the Beinecke Library, Yale University

Brush up your Shakespeare / words and music by Cole Porter (New York, N.Y. : Buxton Hill Music Corp., c1949).   Sheet music, for voice and piano with chord symbols and diagrams for ukulele, from the collections of the Beinecke Library, Yale University

“A Shakespeare Crossword Puzzle” was completed (or almost completed) by bibliographer and Shakespeare scholar Walter Wilson Greg, at some point after its publication on Christmas Eve in the early twentieth century.  Greg then tucked the puzzle away in his copy of an 1865 edition of Pericles.  Greg’s library was later acquired by the American literary historian and bibliophile, James Marshall Osborn.

As we have seen over the course of the exhibition, Shakespearean texts were continually interpreted and re-written for different audiences, in different media, often with radically different conclusions drawn by author or artist.  The Yale University Art Gallery has highlighted one example of this process in a display drawn from their permanent collections, on view through June 10, of the American artist Edwin Austin Abbey’s drafts and revisions towards his final painting of a scene from Richard III.

Below, a scene and study towards the portrait. 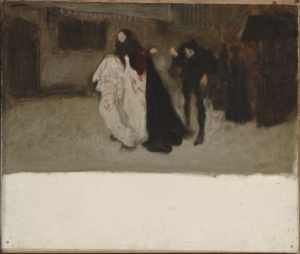 Actors of Hamlet from the mid-nineteenth century, in another image from the Yale Center for British Art exhibition, While These Visions Did Appear.   As we have seen already, with Henrietta Bowdler’s The Family Shakespeare, from 1807, and with prints like “The Lover of Shakespeare,” where Shakespeare sits alongside the embroidery table and harp in the parlor, by the early nineteenth century Shakespeare had entered into the well-ordered English household, there to play with or educate the children, or to lift the mind and spirits of other family members.

Remembering Shakespeare has explored David Garrick’s appropriation of Shakespeare, and the emergence of Shakespeare as an English national icon over the course of the eighteenth century.   “While these visions did appear”: Shakespeare on Canvas, a parallel exhibition at the Yale Center for British Art, considers the visual engagement with Shakespearean performance and text in the eighteenth century.  An online gallery shows some of the exhibition highlights, drawn from the permanent collections of the Yale Center for British Art.

As exhibition curators Eleanor Hughes and Christina Smylitopoulos relate, “Artists and patrons in the eighteenth century responded to and encouraged the assertion of Shakespeare as Britain’s foremost national playwright. Through the remarkable efforts of David Garrick, the actor and Drury Lane theater manager, the plays flourished on the stage, while the promotion of the playwright as the “immortal bard” was seized as an opportunity to foster a British school of history painting.”

Remembering Shakespeare draws on the Shakespearean collections, in print and manuscript, across Yale University’s institutional holdings, in particular those of Yale’s Elizabethan Club, Lewis Walpole Library, Yale Center for British Art, and the Beinecke Rare Book and Manuscript Library.  But another concurrent exhibition, “Yale’s Shakespeareans,” on view in Yale University Library’s Memorabilia Room, documents Shakespeare particularly at Yale, in the curricula, performances, and collections of its faculty and students over centuries. 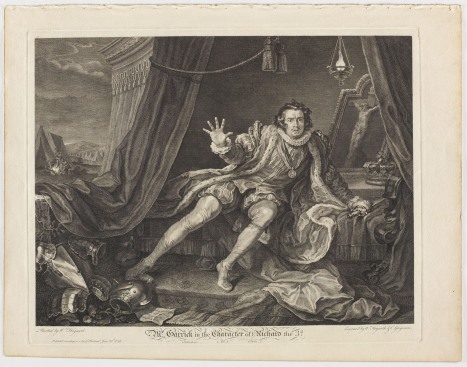 “Mr Garrick in the Character of Richard the 3d,” by William Hogarth.  Collection of Prints from Pictures Painted for the Purpose of Illustrating the dramatic Works of Shakespeare, by the Artists of Great Britain. London: John and Josiah Boydell, 1803.  From the collections of The Lewis Walpole Library, Yale University